Understanding the importance of an API when making software purchases 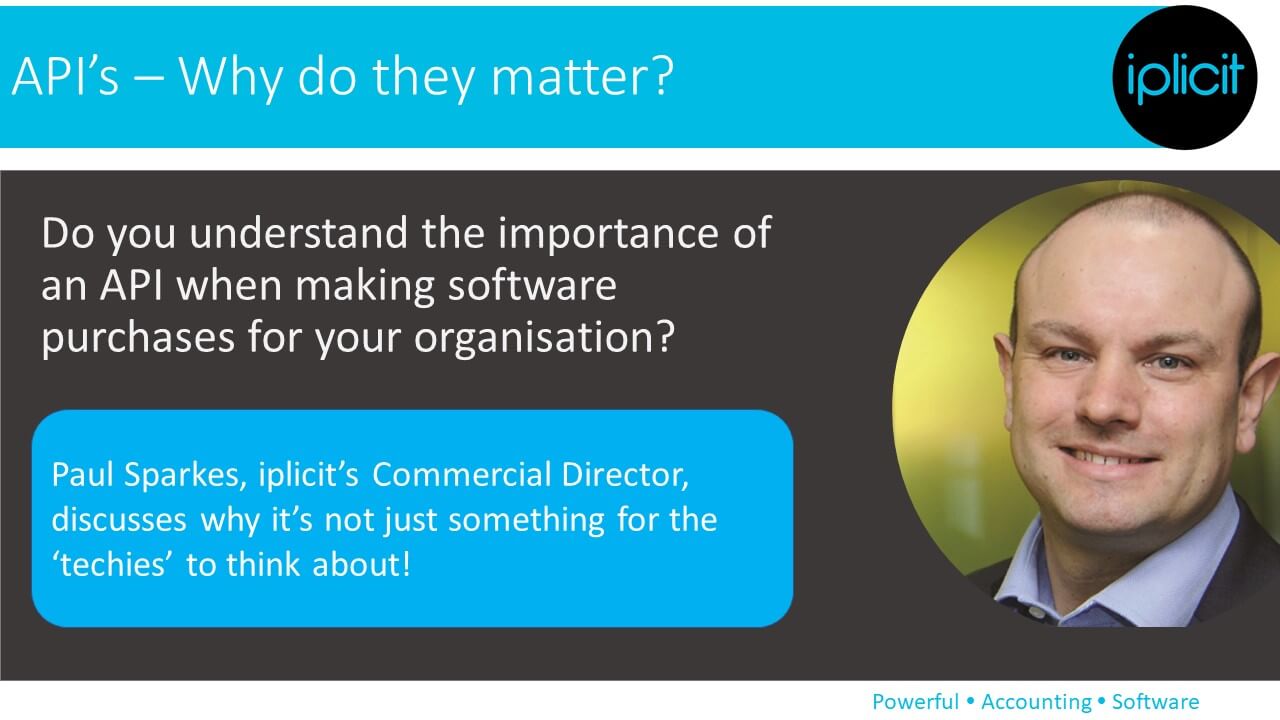 What is an API?

API stands for Application Programming Interface. It is effectively a standard language that different software applications can use to pass information between each other.  Each software package that has a public API is able to communicate to other applications ‘these are the ways that you can talk to me and this is what you are able to do e.g. add a new customer or a sales invoice etc’.

Why do you think it’s important for the layman to understand?

If properly understood and utilised correctly, API’s have the ability to be the key accelerant for organisations post COVID.  To put things into context, let me explain how things used to work. In the past, if somebody wanted to create an interface between two applications, it was either clunky, because it was some sort of ASCII file being passed between applications, or it was expensive because somebody would have to develop the connection in a bespoke, specialist way with knowledge of both systems. And, not only was expensive to create a bespoke solution, but it was expensive to maintain – as it required maintenance of the code to keep up with version changes in either of the software applications being connected.

The advantage of an effective public API is that it protects the user from problems arising from version changes in any of the software applications that pass data.  An API sets the parameters for all the applications to talk in a common language that’s compatible. With all vendors using this same, standard approach and setup, if they have a public API, life becomes much simpler, for the end-user and the IT resources managing the organisation’s network.

To illustrate the difference, in the old days we had these islands of information – data in each application. Either it was clunky to get the information out or more often as was the case, somebody would have to re-key the data from one system into another, which is not only time consuming but also drives the opportunity for error through the roof! In the past, I saw far too many organisations that presented a digital ‘face’ to the world, in the form of an ecommerce website that could take orders online, only for back-office staff to take printouts of those orders and manually key them into a different system. While many of these order processing ‘gaps’ have been fixed, there are still aspects of customer relationship management, within and organisation, that is basically siloed information – meaning that data has to be rekeyed or duplicated, or time is wasted checking and double-checking between software systems. For instance, it is still unfortunately very common for me to see salespeople accessing customer records through their CRM application and yet they have no idea as to the status of any particular customer, from a financial perspective. Is the account up to date with payments? What have they ordered so far this quarter / YTD? And so on. With an effective integration using a public API, inefficiencies like this are a thing of the past – One version of the truth can be seen at all times because the data is fluid, where needed, between all systems and nothing is siloed unless by design.

That makes sense, but why relate API’s to COVID and the recovery of organisations post lockdown?

Well, because more than ever before, people aren’t going to be in their offices on a full-time basis; the new normal won’t be back to a 9-5.30 as before for many, many office workers. While a vast majority are excited by the prospect of a return to the office and a modicum of normality, with the kids at school again, and the ability to socialise with work colleagues and the like, overwhelmingly most of the surveys show that for many, the ideal new-normal is part office and part flexible working. We’ve now habitualised video meetings in such a way as to not need the office for an essential work tool. It’s still an important long-term required and has it’s place, but the idea of flexible working is very much here to stay. Only recently BP announced that 25,000 of its staff would return to the office but still have two days a week working from home – this was part of a cost-cutting drive that also played to the desires of many of the staff. I think there is much more of this to come, from organisations of all sizes and, if they are to attract the best talent, they will have to offer flexible working terms as part of a package.

The key ramification of this flexible working is that paper-based workflows have to be eliminated wherever possible; it’s just not practical to rely on paperwork, if the team administering the process is spread geographically. But this isn’t why API’s are really exciting – driving efficiency is good to do, but something maybe the finance team get excited about, but not often the whole organisation. The exciting bit is the way that the COVID disaster has forced many organisations to improve resilience and work on upgrading all of the weak areas to ensure that remote working can run smoothly and paper-based requirements are a thing of the past. Basically, the silver lining of this global debacle is that it’s accelerated the move towards true digital journeys and focused everyone’s attention on just how essential a true cloud-based workflow is for most organisations. And this leads to real opportunity with this elimination of geographical dependence, on staff and customers. Systems are now being designed, implemented and trained to go live status, without ever meeting the customer! Just three years ago, for many complex offerings, this would have been unimaginable, yet now it’s completly accepted.

In a similar vein, customers and suppliers are now waking up to the fact that for a truly digital workflow to be effective, it’s not just connecting applications within the organisation but also between organisations. While in the past, this would have been the domain of major partnerships and strategic alliances, who could justify such investment into connecting to each other’s systems, nowadays a public API takes care of the security and complexity with relative ease. We are entering an era where an API and your ability for your systems to integrate with your prospects may well be a differentiating factor that sets a company apart from its competitive offerings.

As a result of efficiencies between trading relationships, service levels can be higher or costs can be cheaper, sometimes both! And importantly, transaction volumes can be so much more scalable when the systems connect automatically and paper is eradicated from the journey. A good example of this is HMRC’s introduction of MTD last year along with it’s Digital Journey requirements that come into force in April 2021 – while inconvenient for some who had to make a change in their manual practices, the reduction in error and efficiency improvement has been significant.

What if you aren’t interested in connecting to prospects or suppliers? Does that mean it’s not really that important?

No, an API is still important, even if considering only your own organisation, let me explain – Historically, when choosing software for different areas of your business, consideration would be made for applications that already had some level of working with others. Indeed, compromises were often made on the basis of needing to make something work across a workflow and having to choose between a limited suite of vendors that had some sort of alliance and had done some of the connectivity previously.

However, now with public API’s being a mature proposition and with the majority of software applications having a cloud-based proposition, no such compromises need to be made. You are now free to choose the CRM system that fits your requirements exactly, along with the best of breed finance system and so on. Providing they have a public API, the connectivity is plug and play compared to how it used to be. Consider it like the Garden Hoselock of the technical world – when you go to the garden centre and buy something with Hoselock connectivity, you know you don’t have to worry about it not fitting your other attachments!

And with this common ground, you can evolve your systems with confidence, knowing that connectivity won’t suddenly be threatened by an upgrade or a version change.

Having iplicit true-cloud API enabled solutions is absolutely going to be the key to helping organisations accelerate quickly, post COVID, and have the fastest recovery.  Those that attend to the on-premise software bottlenecks and paper-based workflow challenges will improve productivity, reduce errors and enable a seamless digital journey that will facilitate remote workers.

End to end systems that ‘talk’ to each other seamlessly, through public API standards, will be the bedrock of competitive advantage for many organisations large and small.